Building a New Foundation When Grieving

It’s been a minute since I’ve written a blog post. Finding the right words isn’t always easy when dealing with grief.

Louis L’Amour once said, “The water does not flow until the faucet is turned on.”

Well, lately I haven’t had the courage to turn the faucet on. Sometimes, it’s hard to say what it is you feel inside, especially when you don’t always know what that is. That’s grief though. It’s feeling so many things, it can be hard to parse what feeling is what.

I was driving the other day and was quite inside my own head. Suddenly, it dawned on me, “Wait, Mike is dead. Really dead. This is for real.” It’s been a year-in-a-half, and I still have those moments where I forget he’s gone. Then, just like that I have to go through the realization all over again that my life is forever changed. That nothing is the same, the familiarity I had known, the security of having that kind of love will never be again (not in that way).

Shawn Mendes recently talked about this on his Instagram page as he reflected on his recent breakup with longtime girlfriend, Camila Cabello. “I think that’s the reality that kind of hit me. It’s like, ‘Oh, I’m on my own now,’” the singer, 23, said.

Continuing, he said, “Now I feel like, I’m actually on my own, and I hate that. That’s my reality, you know?” Mendes, who was sitting at a piano and speaking candidly to the camera, added that he didn’t realize “all this s–t that comes after” a breakup.

He was just talking about a break up–which, when it’s been years with someone, yes it’s hard. Now, imagine it’s the love of your life, your spouse, and neither you nor he/she had a choice or a say. You don’t get to decide or have control over what happens; your person is just one day gone. I’ve gone through many of these moments of, “Oh wow, who do I turn to when my anxiety is bad?” Or, “Who do I share my day with, talk through obstacles or hard work days with?” Even after all these months, it still creeps up on me in the quietest hours; in the middle of the night when the world is fast asleep; in the stillness between breaths.

Redefining who you are after you’ve spent nearly two decades with one person, when your whole life has been built around that person, and theirs around you, is no easy feat. It can be done, it has to be, but it’s not easy. The adjustments come in waves. Eventually you look back and realize you’ve moved quite a distance, but then you look ahead and realize how much farther you still have to go. It’s even harder when the loss of your spouse isn’t the only loss you are mourning. That amount of loss is a mountain to climb. That’s grief–that’s the grieving process. Those moments are never going to go away fully, there’s just more stretch of time in-between the moments of hurt and realization. 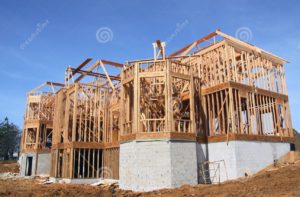 As you start to build a life after your spouse is gone, you build it first on stilts, knowing that it’s shaky and may crumble at any time. Then you start to build it on wood beams, knowing that wood is strong but can rot and break. Eventually you build your new foundation, your new life on cement and concrete–meaning, eventually you find a way to make your new life stable, less shaky. But it does not happen over-night.

Take each day one step at a time and build your new life slowly, changing your foundations as you go. One day, you’ll look back and see that you had the strength you needed to get where you are in that moment (even if it’s messy and you make mistakes along the way). This is all part of the grieving process.

May grace, guidance and gratitude meet you where you are at.