I came across some old text messages today between Mike and I. I had been looking for something in my phone and stumbled across these by accident:

Me- “Pick up those Portobello mushroom pizza things while you’re there.”

Mike- “On it. Preggers. Whatever you need babe. So excited. Love you so much.”

These texts are from March 2018. I was, at that point, almost seven weeks pregnant. I was just starting to show a very tiny bit, I was nauseous, sore, very fatigued, and very happy. His sisters had just sent us a beautiful bouquet of flowers in a yellow smiley mug with a card that read, “We are so excited and so happy for you both. Congrats.”

Mike doted on me. We would go for long walks in the village and he would be beaming, staring at me as if the pregnancy wasn’t real. We had our first ultrasound and hung the picture of our little soul on the fridge. It was bliss.

We had already started the adoption process when I found out I was pregnant and we decided we were going to do both. We had been on a waiting list for over a year at that point and it was important to both of us that we adopt, regardless of being pregnant or not.

Less than a week after this text interaction, I miscarried. Because I was less than 8 weeks along (just barely), they said I would probably go through “the process” naturally and not need medical intervention. It was painful. I had to suffer through that 2 more times during the course of 2019. Each time, getting excited, each time crest-fallen when I started to miscarry. Doctors had told me, after extensive exploration, that nothing was wrong with me physically–at this point I was just battling age. If that were true, then why hadn’t I gotten pregnant the last 6 years we had been trying? But a surgery confirmed, there was nothing wrong; no blockages, no massive scar tissue, everything in working order. The Universe knew something we didn’t…..

Around the same time I miscarried, we had been picked for an adoption; a little baby to be born mid fall of 2019. The mother was early in the pregnancy, and after over a 2 year wait, we were finally chosen. It was May 2019. Things were a flurry of activity after that. While I had miscarried my third baby later that summer, I didn’t let it faze me–I was going to be a mom, and Mike a dad. We overhauled one of the spare bedrooms and turned it into a nursery. Bought clothes, crib, books, changing table, car seats, stroller, and diapers. Lots and lots of diapers. Every time Mike or I went to the store, we would grab a few packs of diapers. As Mike put it, “We are going to rip through these so quickly, might as well stock up now.” By early August, the birth mom sent me a text video of the ultrasound–it was a girl! I planned a surprise gender reveal for Mike, who was flying back from a work trip in California. We met in Pittsburgh at my sister’s (long story–but let’s just say, flights were a mess), and video taped the reveal. He was shocked. We hugged, laughed, and he said, “Oh boy, I’m screwed.”

As you all know, within a couple weeks, things changed. While in the midst of planning the baby shower we got the news of his diagnosis. We held off making any decisions until after he started radiation. But we knew, I knew, it was nearly impossible to fly to a different state and try to bring home a newborn and battle his brain cancer. So, once again, I had to say goodbye. Another loss. 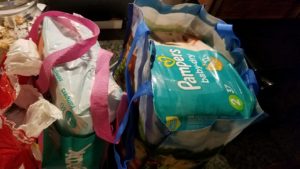 Losses come so many different ways, and there are hidden losses inside the loss. Last week, I took all those diapers (over 200+) we had stock piled, and donated them to a women’s infertility clinic and birth planning center in the city. 9 months after the death of my husband, I knew that the dream was truly over. I quietly walked back to my car, empty handed, sat behind the steering wheel and wept with fury and sorrow. My eyes were wide with fear and doubt. I am now facing the very real possibility that I may never be a parent, a part of a parental team, a husband-wife-family. After that day, I sold the car seat as well.

See loss isn’t just in the loss of the person–or in my case, persons (because those little babies were/are people too). It’s the loss of what could have been. It’s the loss of the dreams we shared. It’s the loss of the future we had started to build. It’s the loss of the possibility that it could happen. When grieving, people on the outside looking in tend to forget that it’s not a two dimensional loss, it’s three dimensional–four dimensional. There are sides that aren’t seen. Whether it was the first house you had just closed on, the European trip you finally had planned, the puppy you picked out and were ready to pick up, refinishing those hardwood floors (only to find you can never enjoy them), or the family you came so close to having… These parts of the loss creep up slowly, and you almost forget to grieve these parts because you are so focused on the main loss-your spouse!

As I came across those texts today, my heart was heavy remembering the excitement of what we thought we’d be planning. I cope right now by holding onto my faith, prayer (for me that’s what is helping), counseling, people in my life that I love, my dogs, and trying to do something active a few times a week; be it crew/rowing, walking, lifting weights, or cycling.

Whatever your loss is, recognize the hidden losses as well. Let them sit with you, and then try to do something active to allow yourself to breathe just a little smoother.

May grace, guidance, gratitude help you find your way.

*A new episode of The Game On Glio Podcast is out now! Listen anywhere podcasts are played, or find each episode right here.*